Addressing the direct drivers of nature’s decline is necessary, but not sufficient to prevent the unravelling of the fabric of life on which all people and future generations depend. This requires urgent transformative change that tackles root causes, as well as the values and behaviors underpinning them. This was the conclusion of leading biodiversity experts, core authors of the IPBES Global Assessment Report on Biodiversity and Ecosystem Services, in an article published this week in the prestigious journal, Science (http://bit.ly/GAScienceArticle).

"Urgent action on land and sea use change, exploitation of organisms, climate change, pollution and alien invasive species is important – but not enough," said Prof. Sandra Díaz, lead author of the new paper and Co-chair of the IPBES Global Assessment Report together with Prof. Josef Settele and Prof. Eduardo S. Brondizio, who also co-authored the new paper, along with a group of coordinating lead authors of the Assessment. “The challenges posed by biodiversity loss and climate change are deeply interconnected and need to be addressed holistically at all levels. Reversal of recent declines – and a sustainable global future – are only possible with urgent transformative change tackling the interconnected economic, socio-cultural, demographic, political, institutional and technological indirect drivers of nature’s deterioration."

The new article distills for the scientific community the most salient and novel findings, messages and policy options of the Global Assessment Report, which was approved by representatives of the 132 member Governments of IPBES in May this year. It emphasizes five priority interventions ("levers") and eight leverage points for action to address these indirect drivers of social and economic systems, where they can make the greatest difference.

Speaking about the impact of the Global Assessment Report, IPBES Chair, Ana Maria Hernandez said: "The world is more aware now than ever before of the devastating impacts of human activities on nature but also of the severe declines in nature’s ability to support people and our well-being. The power of the Global Assessment Report is the comprehensiveness of its evidence and the unanimity with which Governments accepted its findings. This new article makes it even more clear that we need profound, system-wide change and that this requires urgent action from policymakers, business, communities and every individual. Working in tandem with other knowledge systems, such as Indigenous and local knowledge, science has spoken, and nobody can say that they did not know. There is literally no time to waste."

Among the key findings of the IPBES Global Assessment Report, underscored and further confirmed by brand new evidence covered by this new article, is that a million species of plants and animals risk extinction within a matter of decades; that almost three quarters of land and 66% of marine environments have been significantly altered by humanity and that more than 85% of wetland areas have been lost. The article also emphasizes that the drop in the number of wild species and the reduced extent of ecosystems is accompanied by declines in ecosystem integrity, the distinctiveness of local ecological communities and the number of local domesticated varieties. Many species that are large, slow-growing, habitat specialist or carnivores – such as large cats, large sharks, primates, reef-building corals and woody plants– are declining rapidly.

The world has increasingly managed to accelerate the flow of material contributions from nature, to keep up with rising demand. Since the 1970s, per-capita consumption has increased by 45%, global economic activity has increased by more than 300% and global trade by around 900%. However, the benefits of the expanding global economy and the costs of declining nature’s benefits are both unequally distributed. These trends are compromising 80% of the targets under the Sustainable Development Goals. It was also found, however, that it was not yet too late to make a difference – society has been responding but coordinated and robust international action is needed.

The Parties to the United Nations Convention on Biological Diversity (CBD) have decided that the IPBES Global Assessment Report will form the scientific and technical evidence base for the intergovernmental negotiations in 2020, to agree on a global biodiversity framework for the next decade and to replace the Aichi Biodiversity Targets that expire next year.

Elizabeth Mrema, the Acting Executive Secretary of the CBD said: "As the world begins the negotiations of a global framework for nature that is to be agreed at the UN Biodiversity Conference next year in Kunming, China, humanity stands at a crossroads. The pressures driving the unprecedented decline of nature are intensifying. But we can all still choose the legacy we wish to leave to future generations. In many countries, there are real examples of transitions to sustainability, including in the use of land and sea and in the way food is produced and consumed. If scaled up, these kinds of actions can bring about the transformative change necessary to achieve the Convention on Biological Diversity’s 2050 Vision of living in harmony with nature." 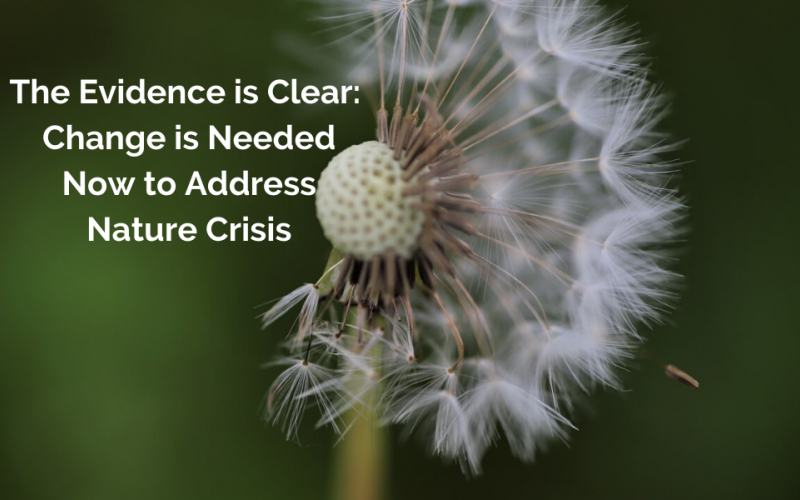