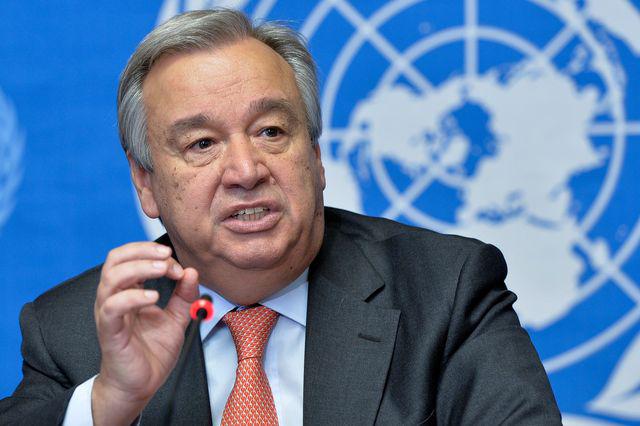 In remarks at today's Leaders’ Summit on Climate hosted by the United States, UN Secretary-General, António Guterres, called on leaders everywhere to take urgent climate action.  “Mother Nature is not waiting, he said. “We need a green planet — but the world is on red alert.”

The UN Chief called on the international community to make this “a decade of transformation,” starting by building a global coalition for net-zero emissions by mid-century to reach the goals of the Paris Climate Change Agreement. “Young people are pushing their elders to do what is right,” he said.

The next step in the right direction, he urged, is for all countries – starting with major emitters – to submit new and more ambitious climate action plans - Nationally Determined Contributions (NDCs) - under the Paris Agreement.

He called for concrete proposals that ease access to greater finance and technological support for the most vulnerable countries to be on the table before the crucial UN Climate Change Conference COP26 in November.

Reacting to the Summit, UN Climate Change Executive Secretary, Patricia Espinosa, said: “The global climate change emergency is a clear, present and growing danger to all people on this planet. It recognizes no borders and while nations may be impacted differently, none are immune. This is a time for leadership, courage and solidarity by global leaders; a time they must make the tough decisions necessary to finally fulfill the promises of the Paris Agreement and move the world away from disaster and towards an unprecedented era of growth, prosperity and hope for all.”

“This Summit, hosted by U.S. President Biden, which brought together more than 40 nations representing 80% of global emissions, is an encouraging and positive step in the right direction. We congratulate the commitments shown by several nations at the summit and I urge all nations to carry forth this leadership and momentum to the crucial COP26 negotiations scheduled for this November in Glasgow.”

The United States submitted their new NDC at the Summit, with a target to achieve a 50-52% reduction from 2005 levels in economy-wide greenhouse gas emissions by 2030. And the United States presented a planto double, by 2024, their annual public climate finance to developing countries relative to the average level during the second half of the Obama-Biden Administration.