30 Years Since the Fall of the Berlin Wall

30 years ago today, the Berlin Wall fell. This had worldwide effects, including on the city of Bonn and the United Nations. With the reunification of the two German states in October 1990, the 17-year dual membership of Germany in the United Nations ended, creating entirely new conditions for the German UN policy and the UN location Bonn.

The "Two plus four treaty" of 12th September 1990, which regulated the foreign policy aspects of German reunification, brought united Germany complete sovereignty over its internal and external affairs. Already on the Day of German Unity, October 3, 1990, the Federal Chancellor Helmut Kohl announced that Germany was to have a more active role in the United Nations. The Bonn-Berlin resolution thus set a new target for the Bonn location, where the first United Nations organization had already established itself in 1951: "The takeover and settlement of new functions and institutions of national and international significance."

The role of Bonn as a location for development policy as well as for the establishment and settlement of national, international and supranational institutions was thus enshrined. The federal government, the state of North Rhine-Westphalia and the city of Bonn joined forces to build and expand Bonn as UN location. With the Berlin/ Bonn Act and a compensation agreement, Bonn was able to create the infrastructure that best suited the role, especially the spatial conditions for the future work of multilateral institutions. With the establishment of the United Nations Volunteers Program in 1996 - and a little later the Climate Secretariat – Bonn’s development into the German city of the United Nations and center for global future topics began. The outward symbol of this development is the growing UN campus in Bonn, in the heart of the former government district around the "Long Eugene", which offers space for around 1,000 United Nations employees in Bonn. 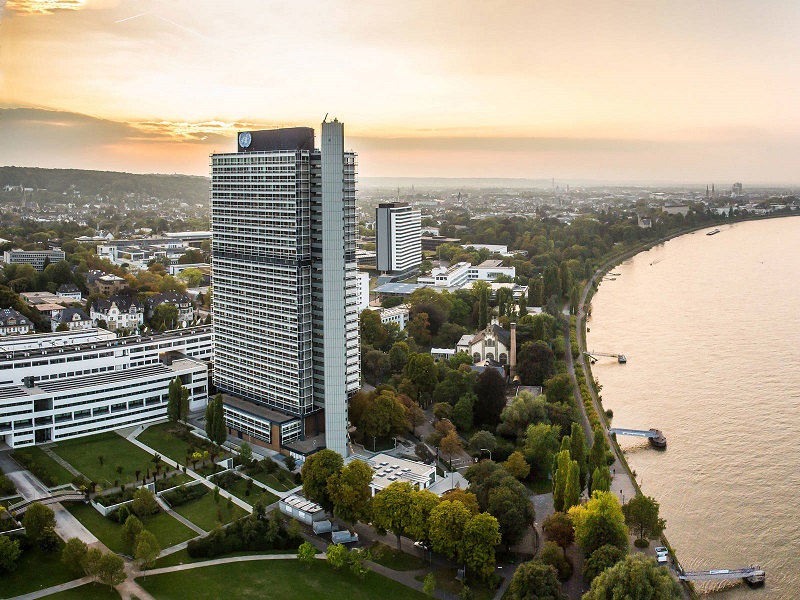