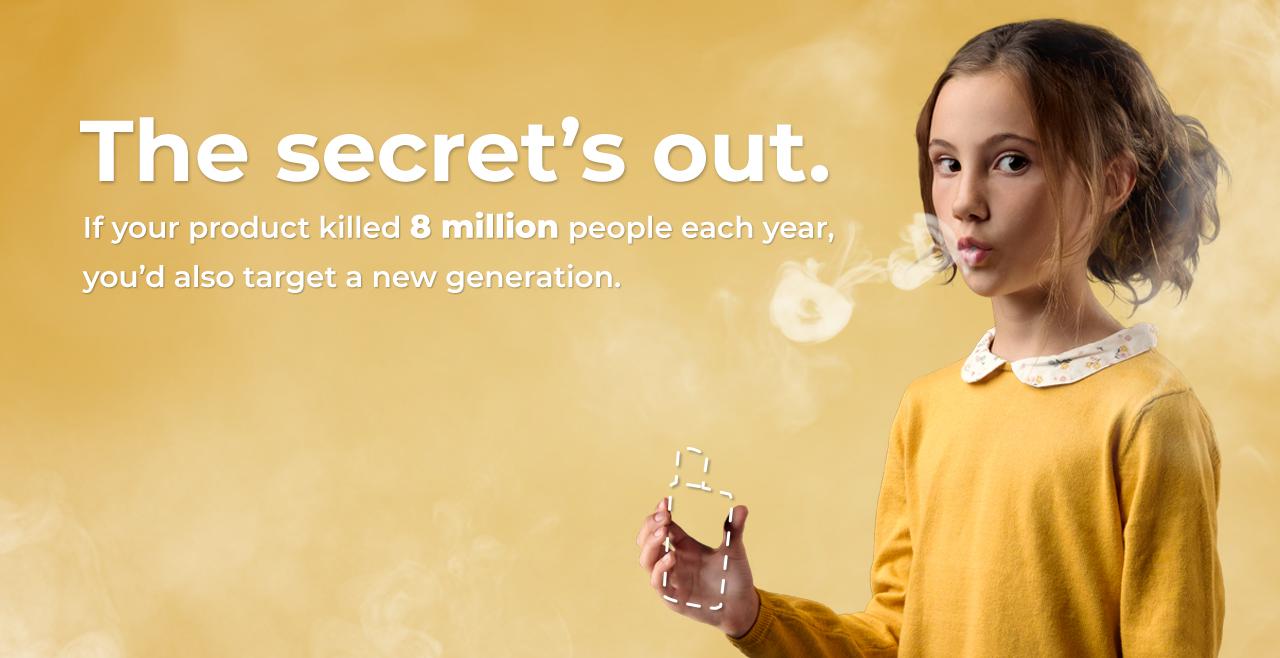 The Secret’s Out: The Tobacco Industry Targets a New Generation

World No Tobacco Day (31st May) this year marked the danger the tobacco industry poses to young people. The campaign strapline, “If your product killed 8 million people each year, you’d also target a new generation”, sets out the challenge plainly – the industry is actively manipulating children and young people into consuming harmful products.

Tobacco use among youth is rapidly increasing in many countries globally, with some seeing higher rates in youth than in adults. In the WHO European Region, 1 in 7 boys and 1 in 8 girls aged 13–15 use some form of tobacco, with a total of 3.9 million adolescents being tobacco users.

E-cigarettes are often promoted as “reduced risk” and “smoke-free” consumer products, when in reality their emissions typically contain toxic substances that are harmful to users, and non-users who are exposed to the aerosols second-hand. Some manufacturers also tend to talk about e-cigarettes and HTPs together, thereby confusing potential consumers, and making it difficult to tell the difference between a tobacco and a nontobacco product.

These promotional strategies are particularly effective in targeting children and adolescents, and have the potential to both drive long-term use of addictive and harmful nicotine products under the guise of being a healthier alternative, and to sustain nicotine addiction in youth globally. Protecting young people from these products – the theme of World No Tobacco Day 2020 – is an urgent matter for public health.

Iona Fitzpatrick, Arsenios Tselengidis and Tom Hird are researchers in the Tobacco Control Research Group at the University of Bath, the research partner in the global tobacco industry watchdog STOP (Stopping Tobacco Organizations and Products).

“Tobacco companies have taken advantage of their product diversification with HTPs and ENDS and an increasingly networked society,” Dr Fitzpatrick explains. “This is done to make contact with broader audiences and embed themselves into the day to day lives of consumers, with increasing efficiency and impact.”

According to STOP, major tobacco companies are now reporting to investors that, since the advent of HTPs and ENDS, total sales and total numbers of users are increasing in many countries. This is a frightening prospect, not only because HTPs and ENDS are themselves damaging to health, but because of the potential impact on conventional smoking. After decades of effort by the tobacco control community to mark tobacco products as deadly, smoking and tobacco-related products could be renormalized.

World No Tobacco Day is hoping to shine a spotlight on some of the nefarious tactics employed by the industry today to push HTPs and ENDS to young consumers in particular. These include their promotion as modern, high-tech and high-end lifestyle products; attractive displays in retail shops; an expansion of digital advertising; a proliferation in flavourings, which appeal to youth, with over 15 000 currently available; sleek package and product design; and event sponsorship.

One of the most striking methods that has come to light in recent years is the use of influencers to promote products to young people online. “Tobacco companies use social media platforms extensively and have worked to make this content readily discoverable by youth audiences using celebrity endorsements, the recruitment of influencers and the inclusion of aspirational hashtags,” Dr Hird says.

Individuals are encouraged to purchase products based on the perceived social image and popularity of the influencer – the latest in a long history of tactics to make smoking “cool”. Legislation to regulate this form of influencer advertising is patchy in the European Region, meaning these unconventional adverts often fly under the radar of otherwise stringent tobacco promotion and advertising measures.

These products are often framed as part of a progressive lifestyle choice, adds Mr Tselengidis. “The use of hashtags like ‘#todayIwill’ and the hosting of public-facing events (pop-up ‘Vapartments’ associated with art and design, for example) implicates HTPs and ENDS as part of a transformational journey,” he explains. The tobacco industry has even sought validation from certain policy circles by coopting tobacco control advocates’ rhetoric for change and progression towards “smoke-free futures”. By leaning into public health discourses of transformation, the tobacco industry has – ironically – sought to capitalize on ideals of a healthier future. In reality, they are hooking young people to highly addictive, harmful products, valuing profit over health.

Tobacco and related industries exploit the fact that the long-term health effects of novel tobacco products have not been established and they are not yet regulated in most countries, enabling them to work around tobacco advertising bans and promote use of their products in smoke-free environments.

Therefore, strong regulation of these products is a clear route to reducing the exposure of young people to HTPs and ENDS. This would also close the substantial marketing loopholes that have allowed these products to gain a foothold in global markets.

“Legislation concerning the development and advertising of these products has been slow to catch up and, where it exists, there is huge variation between regions, which leaves many millions of consumers relatively unprotected,” the STOP researchers say. They argue that effective strategies to combat advertising and promotion of HTPs and ENDS must be pursued alongside clear regulations that can keep pace with the technological and social trends of international consumers.

One of the core components of World No Tobacco Day this year is the launch of a counter-marketing campaign in response to the nicotine and tobacco industries’ systematic, aggressive and sustained tactics to attract a new generation of nicotine and tobacco users. This outreach campaign is designed to engage celebrities, health professionals and governments alike to join forces against the tobacco epidemic.

By rejecting “brand ambassadorship”, educating and empowering young people about the risks of nicotine and tobacco products, and implementing strong legislation, the tobacco industry can be defeated. But it will take cross-border efforts from government, civil society and young people themselves to reject tobacco products, ENDS and HTPs, and thus create a tobacco-free generation.