Review of progress on Sendai targets

The 2019 Technical Forum on the ‘Contribution of the Sendai Framework Monitoring (SFM) Process to Reducing the Risk of the Most Vulnerable’, held from 5-7 November 2019 at the UN Campus in Bonn was organized by the United Nations Office for Disaster Risk Reduction (UNDRR) with the support of the Government of Germany.

This is the third time that such an annual technical forum was organized to review the progress made by countries to implement the Sendai Framework. So far 103 countries have started the monitoring process on disaster losses for 2018.

Participants identified urgent actions to accelerate the achievement of all Sendai Framework targets and in particular target (e) which aims at increasing the number of countries with national and local disaster risk reduction strategies by 2020.

“Disasters are key obstacles to sustainable development and are increasingly intensified by climate change” said Ricardo Mena, Chief of the Supporting and Monitoring Sendai Framework Implementation Branch of UNDRR in his welcome remarks.

Mena also mentioned that “Disasters exacerbated by climate change are the new reality” and “require that we act decisively and with greater ambition”.

Speaking at the occasion, the Deputy Head of the Liaison Office for the UN Campus – Bonn, Federal Foreign Office of Germany, Stefan Kruschke, acknowledged progress achieved so far and emphasized the complex challenges posed by natural and man-made hazards.

The event in Bonn coincided with World Tsunami Awareness Day, which takes place each year on November 5, the occasion for participants to further discuss the importance of target (d) of the Sendai Framework. Target (d) aims at reducing disaster damage to critical infrastructure and disruption of basic services. 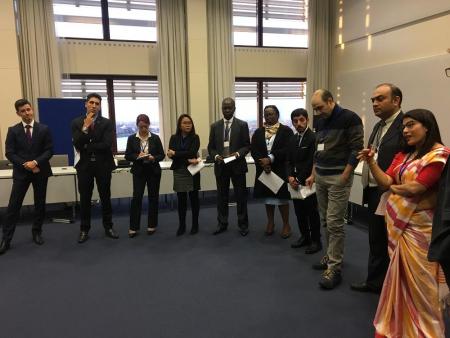