Two new studies from WHO/Europe show that a high proportion of baby foods are incorrectly marketed as suitable for infants under the age of 6 months, and that many of those foods contain inappropriately high levels of sugar.

“Good nutrition in infancy and early childhood remains key to ensuring optimal child growth and development, and to better health outcomes later in life – including the prevention of overweight, obesity and diet-related noncommunicable diseases (NCDs) – thereby making United Nations Sustainable Development Goal 3 to ensure healthy lives and promote well-being for all at all ages much more achievable,” says Dr Zsuzsanna Jakab, WHO Regional Director for Europe. “Foods for infants and young children are expected to comply with various established nutrition and compositional recommendations. Nonetheless, there are concerns that many products may still be too high in sugars,” says Dr João Breda, Head of the WHO European Office for the Prevention and Control of Noncommunicable Diseases.

Although this is permitted under European Union law, it does not pay tribute to the WHO International Code of Marketing of Breastmilk Substitutes or the WHO Guidance. Both explicitly state that commercial complementary foods should not be marketed as suitable for infants under 6 months of age.

WHO developed a draft Nutrient Profile Model (NPM) for children aged 6–36 months to guide decisions about which foods are inappropriate for promotion for this age group. This was put forward to Member States and stakeholders for consideration and further discussion. In 3 of the cities, half or more of the products provided over 30% of the calories from total sugars. Around a third of the products listed sugar, concentrated fruit juice or other sweetening agents as an ingredient. These added flavours and sugars could affect the development of children’s taste preferences by increasing their liking for sweeter foods.

Although foods such as fruits and vegetables that naturally contain sugars are appropriate for infants and young children, the very high level of free sugars in puréed commercial products is also cause for concern. The draft NPM for infants and young children was developed by following recommended WHO steps, and was informed by data from several sources, including a literature review. It refers to existing European Commission directives and Codex Alimentarius standards, and reflects the approach used for the WHO/Europe NPM for children over 36 months. 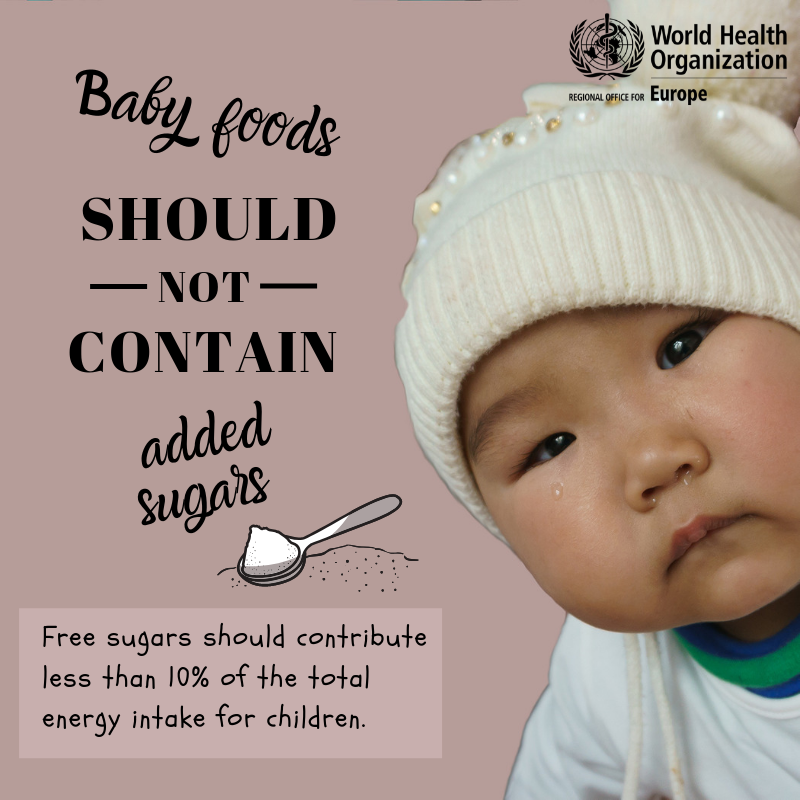