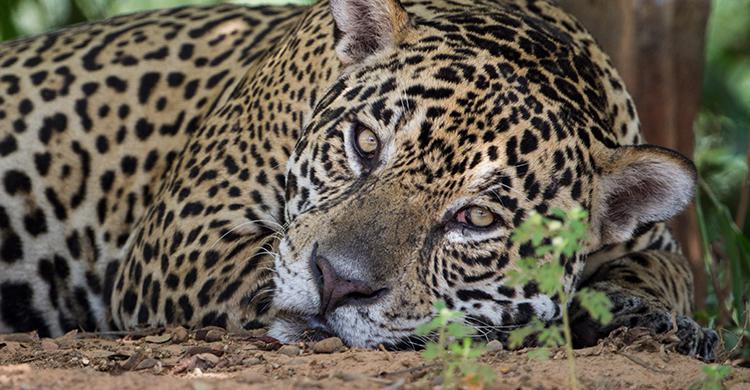 UNEP/CMS Celebrates the International Day of the Jaguar

At the 13th Session of the Conference of the Parties (COP13) to the Convention on Migratory Species (CMS) held in Gandhinagar in February this year, Costa Rica, supported by Argentina, Bolivia, Paraguay, Peru and Uruguay, successfully proposed the listing of the Jaguar (Panthera onca) on both Appendices of the Convention.  Therefore, CMS welcomes the designation of 29 November as International Jaguar Day and the efforts being made to establish a coordinated regional mechanism to promote Jaguar conservation and create a network of connected sites across Central and South America.

The Jaguar is now considered Near Threatened globally with 33 of the 34 sub-populations categorized as Endangered or Critically Endangered and estimates indicate that the species has suffered a decline of between 20 and 25 per cent over the past two decades.  The range of 26 of these sub-populations straddles the borders of 15 countries making international cooperation an essential element of conservation efforts.  Home ranges of individual Jaguars can be as large as 1,300 km2 but the species’ habitat continues to deteriorate and fragment, and it has disappeared from over three quarters of its historic range in Central America and from nearly two thirds overall.  Only the Amazon sub-population accounting for the vast majority of the estimated global population of c 60,000 individuals is considered to be of Least Concern on the IUCN Red List®.  Therefore, International Jaguar Day is also a positive step that can help raise public awareness of the plight of Jaguars and the threats that they face.  Such campaigns can make a considerable contribution to conservation efforts and raising conservation concerns with decision-makers.