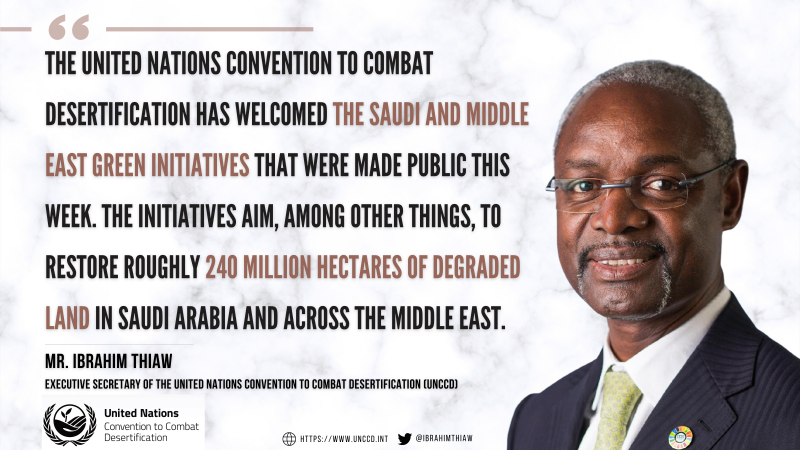 Ibrahim Thiaw, Executive Secretary, United Nations Convention to Combat Desertification, has welcomed the Saudi and Middle East Green Initiatives that were made public this week. The Initiatives aim, among other things, to restore roughly 240 million hectares of degraded land in Saudi Arabia and across the Middle East.

The initiatives would help to combat desertification, reduce the loss of biodiversity and sequester some of the carbon emissions in the atmosphere that are driving climate change. Investing in the restoration of degrading land also improves wellbeing. The dryland forests planned under the regional initiative, for example, could reduce the incidences and economic impacts of sand and dust storms.

The two new initiatives will go a long way in helping the world’s 20 largest economies (the G20) to achieve the two global initiatives, one of which is – launched in November 2020 by G20 leaders under the Saudi Presidency.

The G20 leaders expressed the shared ambition of achieving a 50 percent reduction of degraded land by 2040. The combined Saudi Green and Middle East Green Initiatives move the intent towards achieving this ambition.

The Secretariat of the UN Convention to Combat Desertification welcomes the announcement and looks forward to receiving more information and to working closely with the concerned parties for a concrete implementation on the ground.