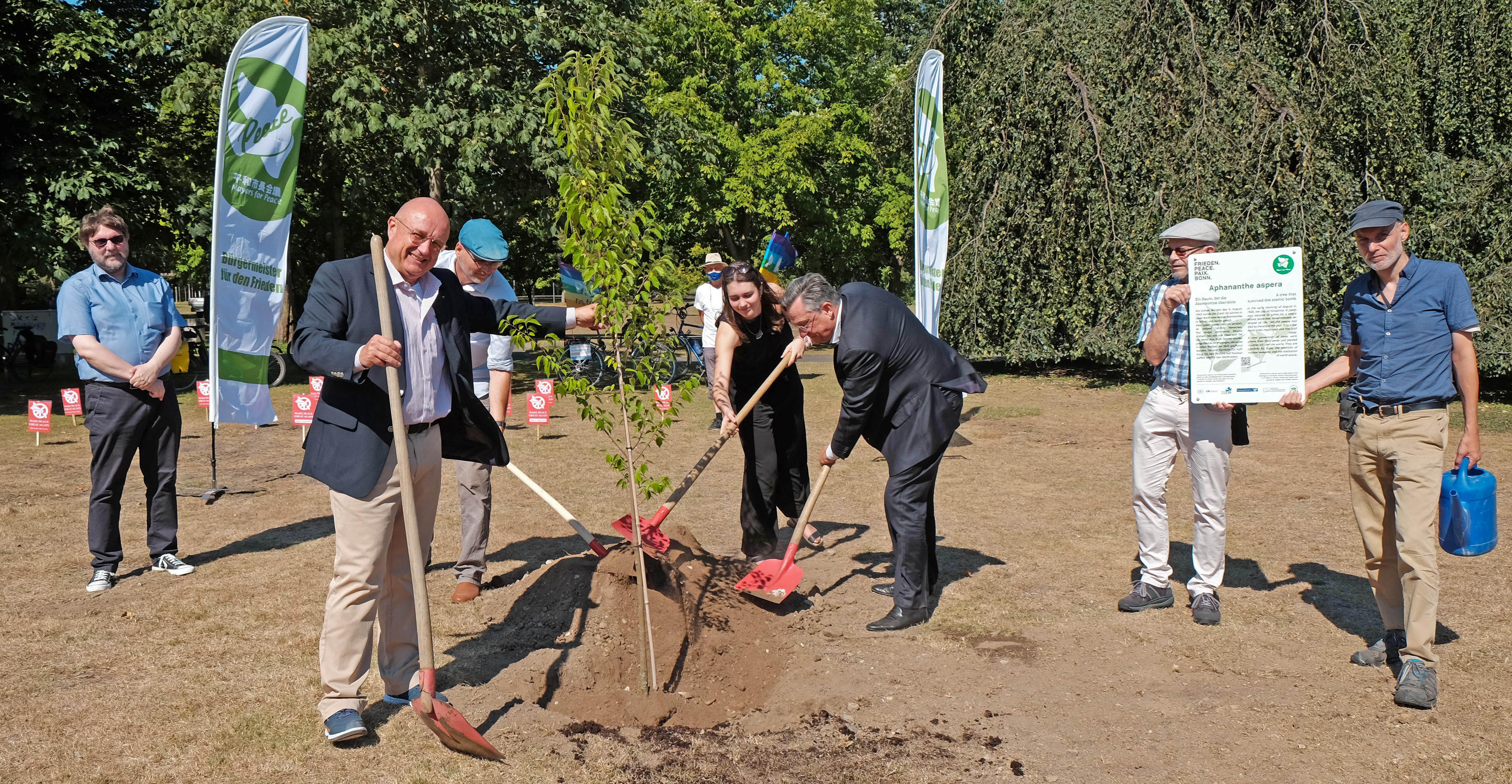 A Tree of Peace for Bonn’s Rheinaue Park

In commemoration of the 75th anniversary of the atomic bombing of the Japanese cities of Hiroshima and Nagasaki, a small Muku tree was planted near the Japanese garden in Bonn’s Rheinaue. The seed of the tree comes from trees in the former death zone and was given to the city of Bonn by the Mayors for Peace network.

The planting ceremony was attended by representatives of the City of Bonn, the United Nations in Bonn, Bonn’s Peace Initiatives and the University Botanical Gardens Bonn. Deputy Mayor Reinhard Limbach said: "With this special tree, we are planting a tree of peace, rooted in memory, to sprout hope. Bonn is the city in which the United Nations is carrying out its work for a sustainable future under a common roof. Peace is a basic prerequisite for this. This year we do not only commemorate the end of a terrible war, but we also celebrate the founding of the United Nations 75 years ago – as a foundation stone for multilateralism and Peacekeeping."

Olivier Adam, Executive Coordinator of the United Nations Volunteers Program (UNV) represented the Bonn-based institutions of the United Nations. He added: “Today, I pay tribute to the Hibakusha, the survivors of Hiroshima and Nagasaki, who despite their own suffering, have been shining examples of turning this tragedy into a struggle to promote peace. Their selfless acts are the epitome of volunteerism, giving their time for future generations to live in peace.”

The Bonn Peace Initiatives are committed to the worldwide abolition of nuclear weapons. The Beuel Peace Initiative, which organizes an annual commemoration event on August 6, emphasized that the planting of the Hiroshima tree should keep memories and admonition alive.

Seeds were a gift from the "Mayors for Peace" network

The planting ceremony was attended by representatives of the City of Bonn, the United Nations in Bonn, Bonn’s Peace Initiatives and the University Botanical Gardens Bonn.

The mother tree of the little Muku tree is a tree that survived the atomic bomb. The bomb destroyed all life in the so-called death zone. Only a few burned trees resprouted and some of them live until today. From their seeds a new generation of young trees was grown, which are now planted in many cities around the world as a symbol of hope and peace.

The City of Bonn received seeds of three different tree species in 2016 from the initiative "Mayors for Peace", which was founded in 1982 by the Mayor of Hiroshima. Since the year 2009, Bonn has been a member of the worldwide network, which is primarily committed to the abolition of nuclear weapons. The current Mayor of Hiroshima, Kazumi Matsui, visited Bonn in November 2017 on the occasion of the Climate Summit of cities and regions.

The Botanical Gardens of the University of Bonn have grown the trees in Bonn. Unlike the other two species, the holly species Ilex Rotunda and the evergreen bridle tree Celtis sinensis, the Muku tree (Aphananthe aspera) has grown quickly. It is found in China, Korea and Japan mainly on slopes and river banks and can reach up to 25 meters in height.