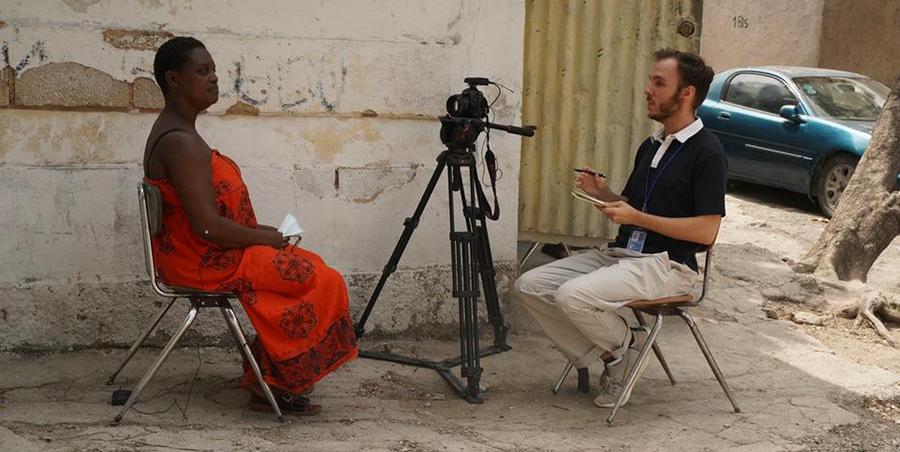 UN Volunteers: Capturing the Stories of those Overcoming Adversity in Haiti

Borja Lopetegui Gonzalez (Spain) serves as a UN Volunteer Communications Specialist with the UN Development Programme (UNDP) in Haiti. He shares how his upbringing, combined with his vocation for social communications, pushed him to impact people’s lives in Haiti.

Growing up in the Basque Country, a region where terrorism has existed and posed a threat to my family’s wellbeing, I developed tolerance, observation and listening abilities that have proven extremely helpful while volunteering in Haiti.

I remember when the UNV recruiter insisted on warning me about Haiti’s unpredictable security situation and saying I would probably work in difficult living conditions. My response was clear: "I am not scared of anything. There is no country in the world I wouldn’t go to in order to help the UN with its mission."

I arrived at Port-au-Prince airport with two suitcases and filled with an unusual mixture of alertness and excitement; the adventure of a lifetime had just started. That same day, the funeral of former president Jovenel Moïse was being aired on TV, which can give an idea of the turbulent and tense atmosphere in which I found Haiti. Since then, I have been working tirelessly to help Haiti stand up.

A magnitude 7.2 (M 7.2) earthquake struck the country on August 14, 2021, followed by Tropical Storm Grace, resulting in over 2,000 lives lost, countless injured and thousands of homes destroyed. This was a huge humanitarian catastrophe, and also translated into a challenge for a UN communicator like me.

Following the crisis communication strategy, I prepared press releases to announce UNDP’s support to the Haitian government, drafted social media messages and coordinated photographers in the field to show the tremendous impact of the catastrophe. I also prepared speeches and country briefings for high-level UN representatives and dealt with media requests to ensure proper coverage of the event.

I was working around the clock, fully concentrated and trying to keep complete control of my emotions. Every minute, I would remind myself that my duty was to help UNDP relieve the difficulties of the Haitian people. Moreover, discovering that the Secretary-General of the United Nations had used my photos to tweet about the earthquake doubled my motivation. --Borja Lopetegui Gonzalez, UN Volunteer Communications Specialist

No two days are alike in Haiti. I lead and supervise several content productions to showcase the reality of many social groups that UNDP supports. This includes women entrepreneurs and merchants, members of the LGBT community, experts in waste management and beneficiaries of an electrification project in rural areas.

I also strive to play an active role in positioning the work of UNDP Haiti strategically. For instance, I was honoured to act as a focal point for governments and media during Haiti’s donor conference, an event that raised 600 million US dollars and aimed to help the country’s recovery from the earthquake.

Likewise, I have established a relationship between the office and UN News, ensuring the publication of our stories on national, regional and global platforms to increase our visibility and reach new audiences.

On the other hand, I have learned that chaotic situations, such as citizen insecurity caused by gangs or political uncertainty, can sometimes undermine the team’s psychological state. This taught me the importance of motivating my colleagues.

While working as a Communications Specialist, I always choose to underline the people's strength so that the world can understand the potential of a developing country like Haiti, where its vulnerable populations can serve as a driving force for long-term development. By doing so, my pieces can bring hope to the nation.

Being in direct contact with local communities has allowed me to delve into the minds of many Haitians and, above all, to value their ability to overcome adversity. For that, I always make sure that the protagonists of my stories are not depicted as victims but as inspiring heroes. --Borja Lopetegui Gonzalez

If someone asked me whether being a UN Volunteer in Haiti was easy, I would say, "No." If they asked me whether I would do it again, I would respond, "A million times." My feeling of fulfilment is simply unimaginable.